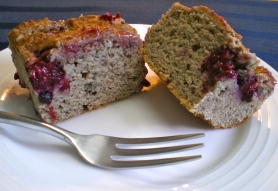 One of the challenges of writing a food blog is deciding whether changes to a recipe are just variations on a theme, or if they create a product different enough to justify a new post.

To be honest, I wobbled on this one. To create it, I had made three changes to the Blueberry Buckle Sans Streusel:

Each of these would be a variation if it were on its own, but put them all together…well, I felt they made a considerable change of texture from the original recipe.

Most significantly, the cake is less moist although I used a smaller pan which made the batter deeper. Was the dryness the result of a difference in fruit, in the flour, or in both? The short answer: I don’t know.

I do have a longer, rambling speculation, but I’ll spare you. Suffice it to say that gluten-free baking remains as fascinating to me as ever.

The second textural change involved the topping. I only added this because the blackberries were tart, but they gave each piece a sweet crunch that didn’t exist in the original…and even merited a compliment from my grandson.

So, given that I think texture is as important as taste…

END_OF_DOCUMENT_TOKEN_TO_BE_REPLACED