Back to the Blog!

It’s been awhile and my apologies, but life (in its inimitable way) intervened and disrupted my blogging. Part of this disruption was a flu that flattened me and left me unable to smell anything for about three weeks. The only things I could taste were sweet and sour. Not helpful for a food blogger. However, I kept on trudgin’ and here’s what I learned. 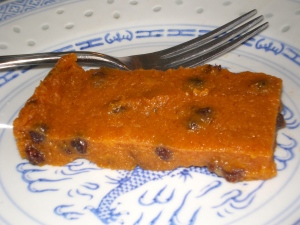 Squash Fudge? Imagine a vegetable dish that tastes like candy. A great dieting concept, right?  This concept began with a Yam Kofta recipe that used cornstarch as a thickener. But, no matter how much cornstarch I added, I couldn’t get the sweet potato mixture thick enough to roll into balls. So, I cancelled the kofta and followed the “when in trouble, make squares” adage.

The result tasted pretty good too. But, being made from potato, it was way too calorie-rich for me. I then tried it with squash and currants. I liked the taste. How can you go wrong with squash when you add brown sugar, cinnamon, and other assorted spices? But the texture was…well, icky, to put it politely.

Erythritol Update: In my last post, I described the horror wrought upon my pan and oven when I tried to lower calories in GF angel food cake by replacing some of the sugar with erythritol. Here’s the reason it didn’t work: melting point.

Sugar melts at 366° F; erythritol, at 250° F. The cake cooked in 350°F oven. At this temperature, sugar would have hardly broken into a sweat while the erythritol boiled, bubbled over, and burnt. This information definitely fits into the “better cooking with a little chemistry” category and inspired me to enrol in “The Science of Gastronomy,” a free, online course offered by Coursera starting in July.

If you haven’t heard of MOOCs (Massive Open Online Courses), please check out www.coursera.org. Right now, 20-odd top universities around the world are offering courses. I took Greek and Roman Mythology from the University of Pennsylvania last fall along with 49,999 other students and really enjoyed it. All the courses are free of charge while the universities learn how to run them and figure out how to give people actual post-secondary credit for taking them. I expect that eventually they’ll charge for these courses, but in the meantime…what a bargain!

Vegetable Growing Discovery: While surfing around the Internet, I came upon a page entitled “Re-Growing Food from Your Kitchen Scraps.” The author had pictures to prove that you could do this, but I wanted to see for myself. So I took the bottom of a head of romaine lettuce, put it in a dish with water, and waited. Sure enough! Miniature lettuce in about 5 days. Unfortunately, it was bitter but still…very cute.

Potholder Alert!  A month ago, I made a whole lot of French Toast Sans Bread, specifically, 8 eggs + 4 cups of a pumpkin-milk mixture. I filled a shallow glass pan and, as I usually do, put the pan into the pre-heated, 400° F oven with my bare hands.

But, this time, my right-hand pinky finger just touched the burning hot rack. My neural circuitry for pain avoidance went into overdrive, and I jerked away rather than just lifting my hand slightly. The result was the liquid equivalent of 52-card pickup!

Not only was all that breakfast lost, the spouse and I had to remove the door of the oven to clean it, the floor had to be mopped, and I had splashes up to my knees. I’m filing this under “stupid, stupid” and now use potholder gloves when pans are going into the oven as well as coming out.