Q: I want to eat a healthy diet/lose some weight/keep those pounds off. I know I have to eat lots of vegetables. But how do I get beyond raw carrots, steamed broccoli and salad, salad, and more salad?

A: Have a wide variety of vegetable dishes at your fingertips.

Unfortunately, this is easier said than done. I don’t know about you, but I didn’t grow up learning how to be innovative with vegetables. In fact, they were generally just a humble afterthought, plopped down next to the good stuff—meat and potatoes—and followed by the highlight of our family dinner—dessert.

Consequently, I’ve spent a lot of time trying to find ways to eat large quantities of vegetables without getting bored. As part of this investigation, I learned to roast vegetables: a sure-fire way to have a lot of ready-to-eat vegetables in the refrigerator. 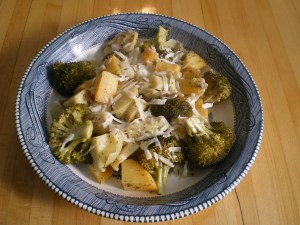 My initial dishes contained a mix of traditional vegetables: carrots, cauliflower, zucchini, leeks, butternut squash, and so on, with a sprinkling of an herb or spice.

For example, in the photo to the left, the dish contains broccoli, rutabaga, parsnip, and thyme, topped with melted, grated sheep romano. Yum. (Really. The cheese does amazing things for rutabaga.)

Now I’ve started to focus on the humblest of the humble—root vegetables. Apparently, I’m not alone. According to Mark Bittman, a New York Times food columnist and cookbook author, root vegetables are the latest food trend:

“There was a time when the only root vegetables anyone paid attention to were carrots and potatoes…Turnips were déclassé, celeriac unheard of, beets a pain to clean. The perception has changed, in part because it was all wrong; in part because if you’re going to eat seasonal and local, you are going to eat roots in winter, even if you live in California; and in part because roasted root vegetables, which most of us have discovered only recently, are, like, the greatest thing ever.” (New York Times: January 26, 2012)

Q: Why are roasted root vegetables so terrific?

A: Because they taste great, they’re great for you, and they make a great contribution to vegetable variety. (Most of them are also the cheapest vegetable you can buy in the winter.)

Again, starting to use root vegetables is easier said than done because many of them are strange to us. For example, if you’re like I was three months ago, you…

Here’s the surprise. The interiors of root vegetables are surprisingly mild in taste, non-threatening in appearance, and easy to cook. Just peel ’em (if necessary), chop ’em and throw ’em into a pan.  (You can also eat many raw, but that’s the subject of another post.)

And don’t worry about mixing and matching root vegetables in one dish. Bittman says that when it comes to cooking root vegetables, they are “interchangeable…Their density is quite similar, so they cook at about the same rate. Most contain starchy sugars, so they brown beautifully and become sweet after cooking.” 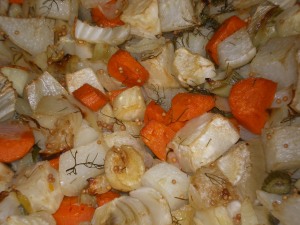 This recipe makes 11 cups of vegetables. It has a sweet mild flavour that contrasts well with the slight tang of mustard, and provides a pleasurable variety of soft and crunchy textures. And it’s easy on the diet—only 93 calories per cup.**

Would you like to learn more about root vegetables? I’ve found the following sites helpful:

*The dressing is from Sara Conrad’s recipe “Getting Back to Your Roots with Roasted Parsnips and Carrots” at Indiana Public Radio: Earth Eats.)ram.