Potato-Crust Quiche, with Broccoli and Mushrooms

Quiche—that heavenly blend of crust, eggs, milk, and whatever filling—has been off my radar for years because of my lactose-intolerance.  I would go out with friends and watch with envy as they ordered the quiche and salad special for lunch.  Sigh (many times over).

But now, no more self-pity, thank you very much!  Thanks to a helpful post from Shirley at Gluten-Free Easily on how to build a quiche, I began to re-consider my quiche options: potato instead of flour crust, soy milk instead of regular milk, liquid egg substitute instead of regular eggs, lower-calorie romano cheese instead of higher calorie other cheeses, and lots of vegetables.

My most successful experiment, thus far, has been quiche with broccoli, mushroom, and onion, and this is what I am posting today.  In this quiche, I follow Shirley’s lead by using grated potato for the crust.  However, you could also use use mashed potatoes or potato slices.  If you do, please do some Internet research on how those crusts are prepared and cooked. 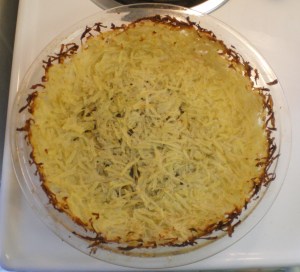 4 thoughts on “Potato-Crust Quiche, with Broccoli and Mushrooms”