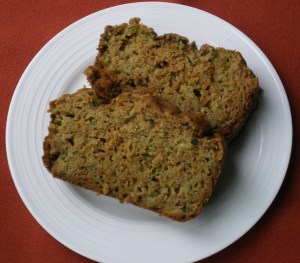 (Update April 2012: I have refashioned this recipe to lower the calorie-count and changed it from a bread to Zucchini Cinnamon Squares.)

This bread is dense, rich, moist, and fragrant with cinnamon and other spices.

The quinoa flour has another benefit for dieters: it’s “cheaper” than rice flour in terms of calories and Weight Watcher points than the white rice flour that was called for in the original recipe.

My husband, who has a stomach of iron, can eat anything, and doesn’t need to lose weight, used to stay away from my gluten-free, diet experiments.  Not any more.  Now the sounds and smells of bread coming out of the oven has him wandering down to the kitchen just in time for a sample before I take the photographs. 🙂

(Adapted from “Zucchini-Spice Bread” in Gluten-Free Every Day Cookbook by Robert M. Landolphi)