Pursuing the Perfect Vegetable Pie: I 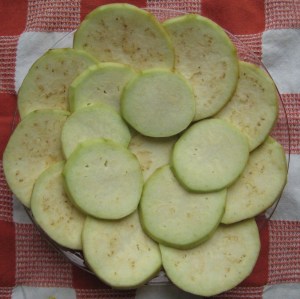 Note (posted later): This was my first attempt at a vegetable pie.  I did finally succeed with the Mushroom-Eggplant Vegetable.

What could be more low-cal than a vegetable pie made with an eggplant crust?  Not much, and this thought has been driving me down the path to creating a great-tasting, healthy, filling, and diet-conscious vegetable pie.

The idea for the eggplant crust comes from a recipe that had been in a Weight Watcher’s cookbook from the 1970s (now long gone).  This crust was made by raw, overlapping eggplant slices.  What made this particular idea so novel in those days was that the standard for cooking eggplant was to fry it in oil, e.g., eggplant parmagian.  And, if you’ve ever done this, you know that eggplant slices can drink their weight in oil.

The only other thing I remember about this recipe was that nothing was cooked in advance and all the vegetables were raw.  I did some online research but came up with nothing that even vaguely resembled what I had in mind.  So…pursuing the perfect vegetable pie.

My first try: I used sliced tomato and leek, put grated sheep romano between the layers, and topped it with bread crumbs.  I baked this concoction at 400° for 25 minutes.  It smelled good and tasted “interesting,” a bit reminiscent of eggplant parmagian.  Not bad, not great.  Unfortunately, although it looked nice going into the oven, it returned looking worse for wear with the scalloped edges of the eggplant wilted and brown. 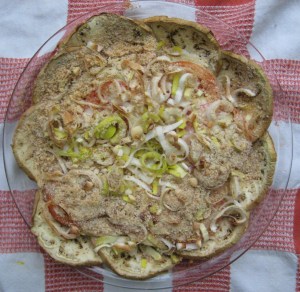 Message to self: Try different combo of vegetables and pay attention to aesthetics.

If any of you has some ideas, please let me know.  In the meantime, I’ll keep you posted.